My Campus Visit to Wabash College 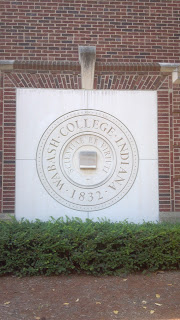 Founded in 1832 by graduates of Darthmouth College, Wabash College is a top tier liberal arts college as ranked by U.S. News & World Report and Forbes Magazine. This New England style campus with Georgian buildings is located in Crawfordsville, Indiana, a city of nearly 16,000. It is approximately 45 miles northwest of Indianapolis and 150 miles southeast of Chicago.
All Male Student Body
Upon entering the 60 acre wooded campus, you will immediately notice something unique about Wabash College; the all-male student body. It is one of three remaining traditional all-men’s liberal arts colleges in the United States (Hamden-Sydney and Morehouse being the other two).
The all-male student body, along with its smaller size (just over 900) allows faculty members to be actively involved in a student’s lives. The professors (there are no Teaching or Graduate Assistants) develop a close relationship with the students. They notice when a student is not in class, are not working up to their potential or attempting to ‘hide’ in class. Wabash feels the all- male experience and the small student population allow the students to focus on their academics.
The Gentleman’s Rule
There is only rule at Wabash and it is simply known as The Gentleman’s Rule. The rules states  "The student shall live both on and off campus as gentlemen and a responsible citizen." Each student is expected to behave as responsible citizens not just upon graduation, but upon entering college. The rule is not just enforced by faculty members as the student’s have high demands for one another. According to me tour guide, each student behaves in a way that “their classmates would want them to date their little sister.”
The professors have the highest behavioral expectations of the students. More than one student mentioned to me that a professor will pass out an exam, then retire to their office, leaving the students unsupervised to complete the exam. A professor feels they should not worry about academic integrity because each student is proctoring the exam. Wabash feels The Gentleman’s Rule helps students to think critically, act responsibly, lead effectively and live humanly.
Academics
The small school environment helps to create a rigorous curriculum. In order to graduate, each senior must pass a comprehensive exam given over three days. Two of those being written exams and the third oral examinations from professors.
Also, fraternities on campus are not the stereotypical fraternities. Each fraternity attempts to breed strong, responsible leaders in the world. One way they do this is through a competition for the highest fraternity grade point average. A little more than half of the student’s at Wabash belong to one of the nine fraternities on campus. Wabash’s fraternities are unique as students (including freshman pledges) tend to live in the fraternity houses that are owned by the school.
Another unique aspect of Wabash is the spring Celebration of Knowledge Day. On this day, classes are canceled to encourage promotion of student work and celebrate academic achievements among the student body.


College That Changes Lives
This small, single sex, liberal arts school was exactly what Loren Pope was looking for when he wrote his book, Colleges That Change Lives (1996). Pope visited numerous colleges that he felt offers as much, if not more than Ivy League schools. Wabash College was one of the 40 schools that Pope chose to include in his 'educational college guide.' Pope felt that Wabash College "is a place that turns young males with great, medium and even mediocre high school records into clear-thinking men who lead the life of the mind and who have the coincidence to take risks."
While visiting the school more than 15 years after he wrote his book, it is clearly evident that Pope was correct in his description of the school. From the pride the student tour guide had in his school, to the willingness of students in the dining hall to answer a few questions about their fraternities, this college is truly rare and worth a closer look for males who want an unique college experience.
Posted by In and Around the Quad at 11:26 AM 2 comments: