The University of Dallas

Established in 1956, the University of Dallas (UD) is a private, independent Catholic university located in Irving, Texas. This 1000 acre campus is home to nearly 1400 undergraduates. 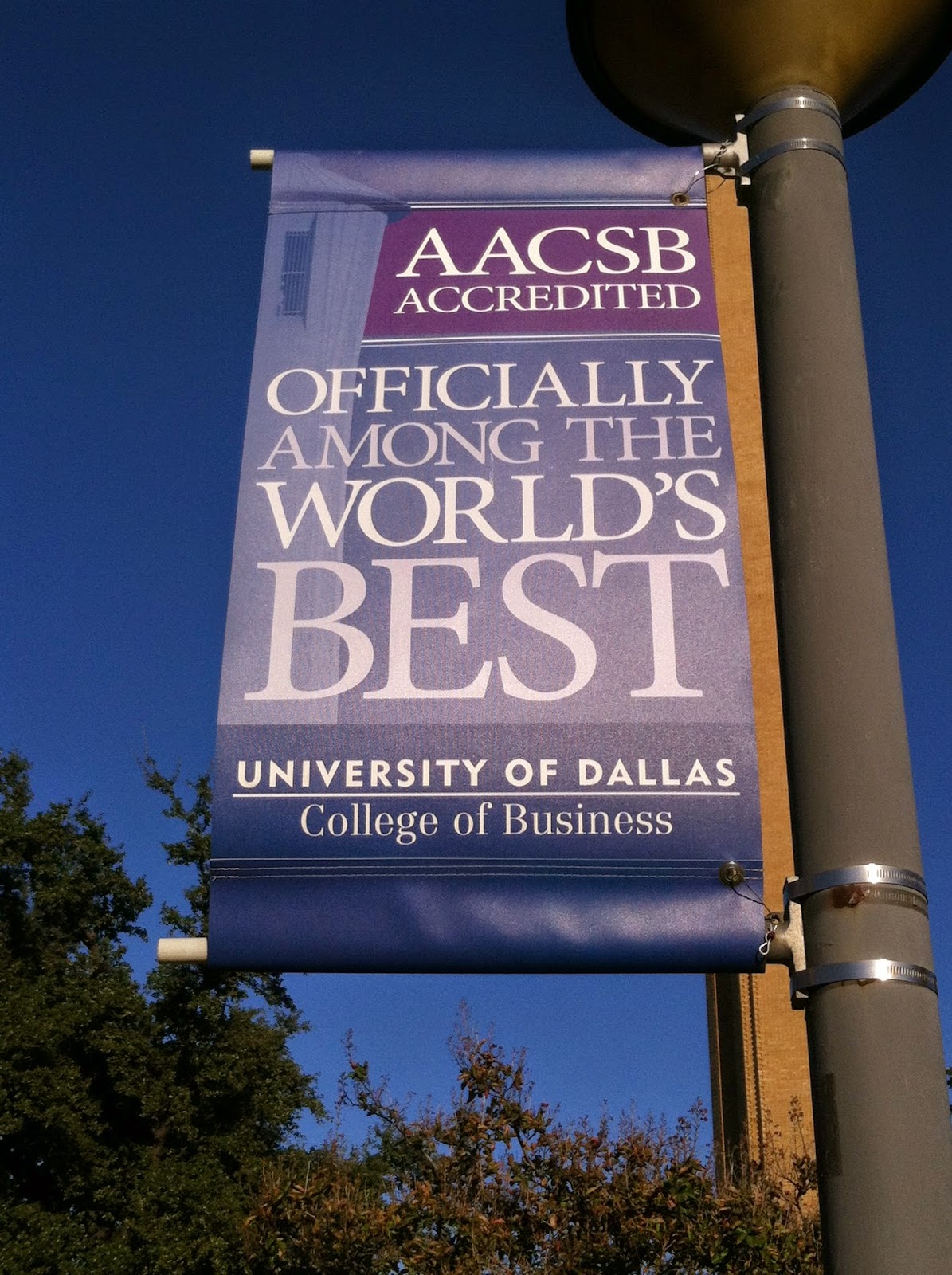 Located 10 miles northwest of downtown Dallas, the college of business offers many unique opportunities. A new Orange Line DART station was recently built, allowing students public transportation access into Texas' largest city. This affords students the opportunity to network and intern at many leading Dallas companies. A recent $12 million donation will allow the building of SB Hall, a state of the art business building, to house the AACSB Accredited Satish & Yasmin Gupta College of Business.

In their underclassman years, every UD student enroll in the same 60 credit hours of coursework. These core courses begin with Ancient Greece and Rome, progressing into the thoughts and traditions that built Western culture. The foundation of this curriculum is the Great Books program. Students read and dissect texts that were written by the most influential scholars of history, "from Homer and Virgil, to John Milton and Rene Descartes." This core curriculum exposes students to a common body of knowledge, allowing professors to teach course across the curriculum. This reading and writing intensive core is equivalent to an Honors College at most schools. After a student completes these required courses, they may declare their major. 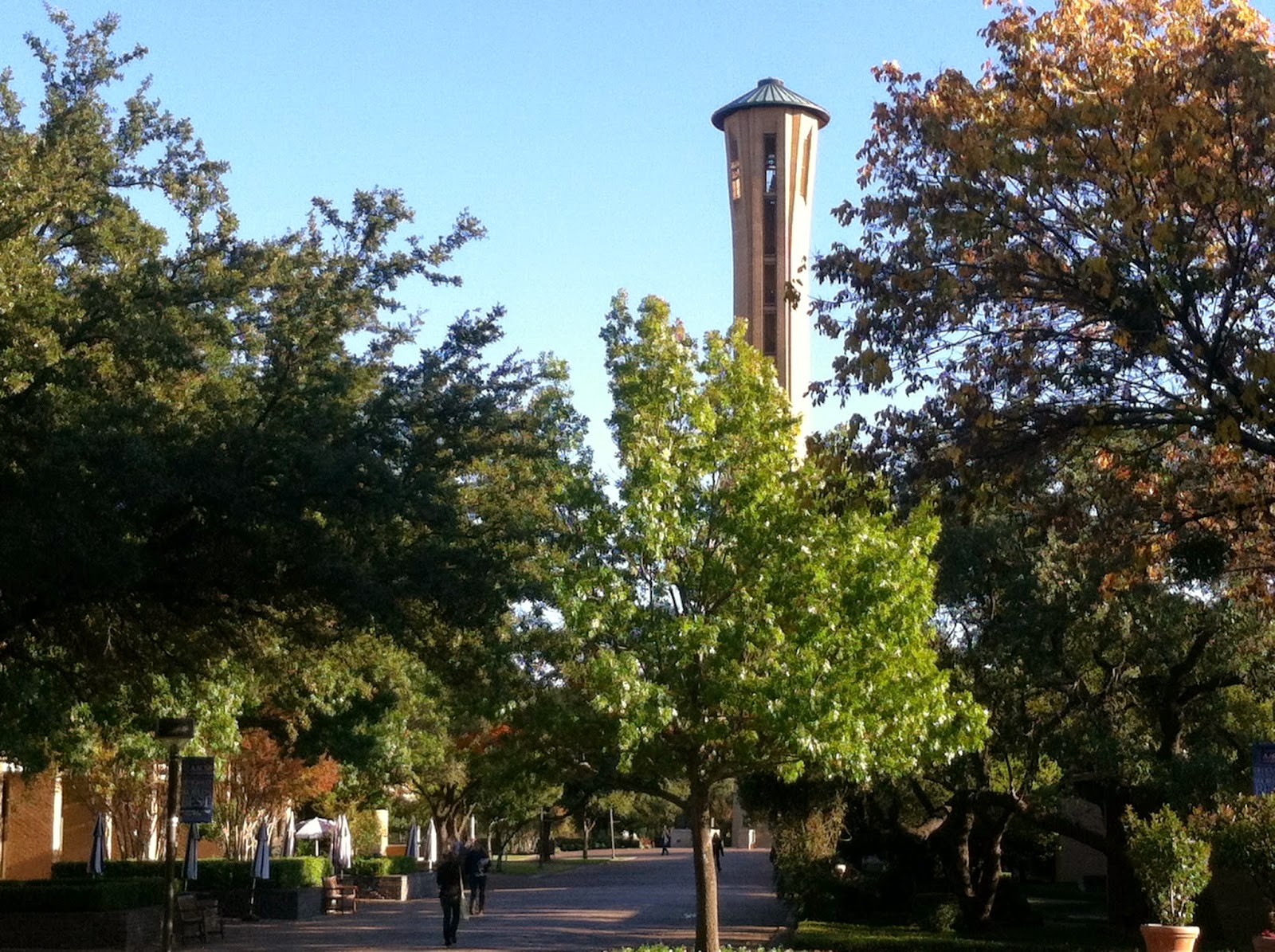 83% of students on campus identify as Roman Catholic. Non-Catholics are welcomed and included in the spirituality of campus. The Campus Ministry Department will help students seek out services at churches of their respective denominations. Even though there is a strong spiritual feel on campus, there is no required chapel services or hours as with many religious colleges. The idea of religion and trust is prevalent on campus. During my visit, this included leaving book bags, iPhones and tablets unattended in numerous locations, from outside the church, coffee shop and random hallways.

In 1970, UD began the tradition of students studying abroad for a semester in Rome. The thought behind sending students (usually sophomores) was to provide them the opportunity to study the Great Books straight at the source, Rome. Included in this unique experience are trips to Greece and Northern Italy. The highlight travel experience is the 10 day break in which students are encourage to explore Europe and/or Asia on their own. This Roman experience has grown the UD study abroad program into a top collegiate program. In 1994, UD remodeled their Italian campus and dedicated it as the Eugene Constantin Rome Campus.

To learn more about the University of Dallas, their unique study abroad program or other colleges, contact us.
Posted by In and Around the Quad at 6:42 AM No comments: 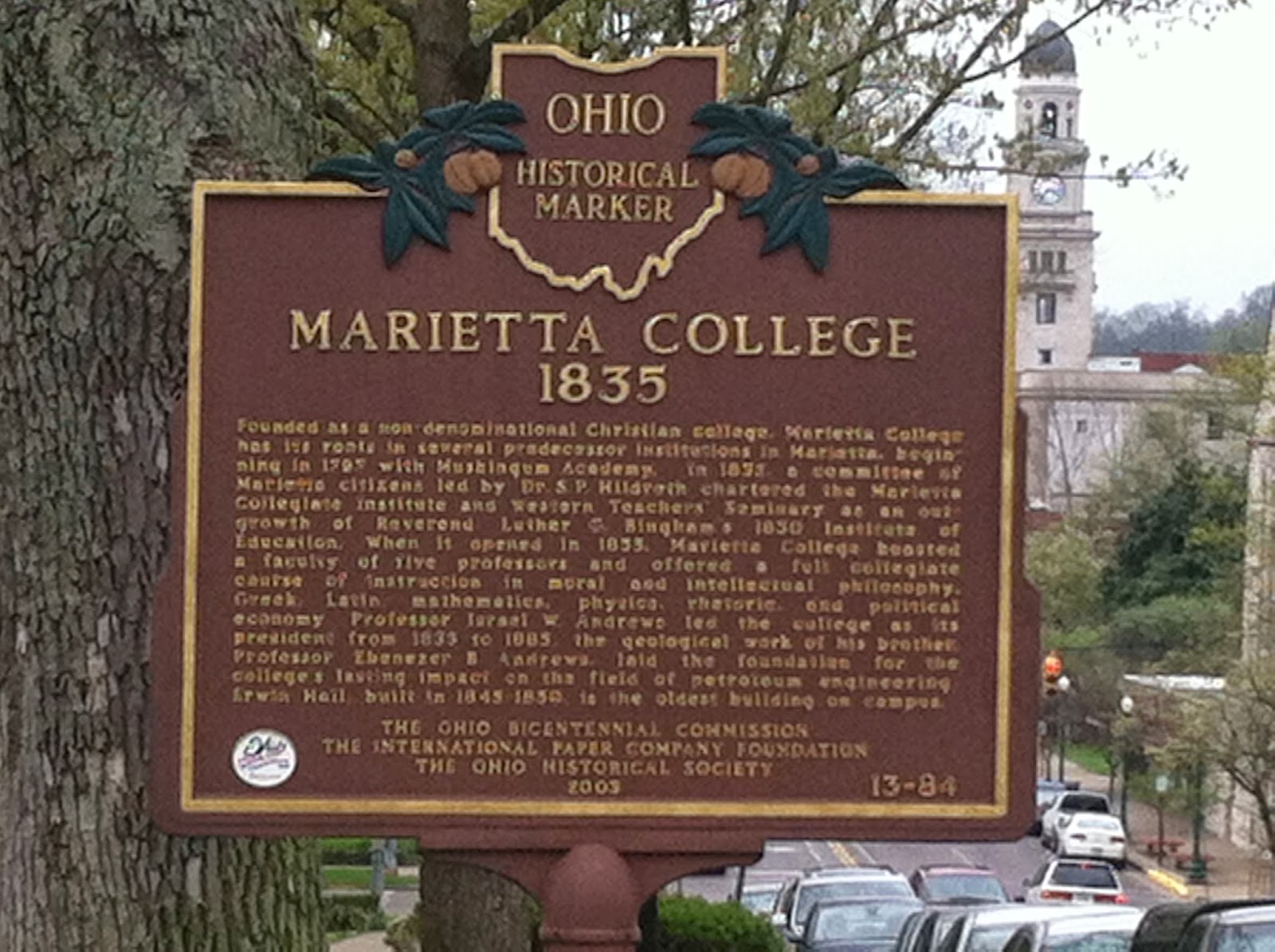 Marietta College, is a picturesque campus located in southeastern Ohio at the mouth of the Muskingum River. This liberal arts college is home to nearly 1500 undergraduates. It is a regionally based college (50% from Ohio, another 25% from Pennsylvania and West Virginia) that is often overlooked for its strong, nationally based programs.

This Rockwellian town of 14,000 was once on the short list to become the first capital of the United States. In 1788, this first permanent settlement of the Northwest Territory, was located in the far western part of the infant country. Named after French queen, Marie Antoinette, Marietta has had its share of historic moments. The town was once a stop on the Underground Railroad. Numerous buildings, including some on campus, can attest to secret rooms or passages for freed slaves. In the 20th century, co-founder of the Marietta based Pure Oil Company, Charles Dawes, served as the 30th Vice-President of the United States under Calvin Coolidge. 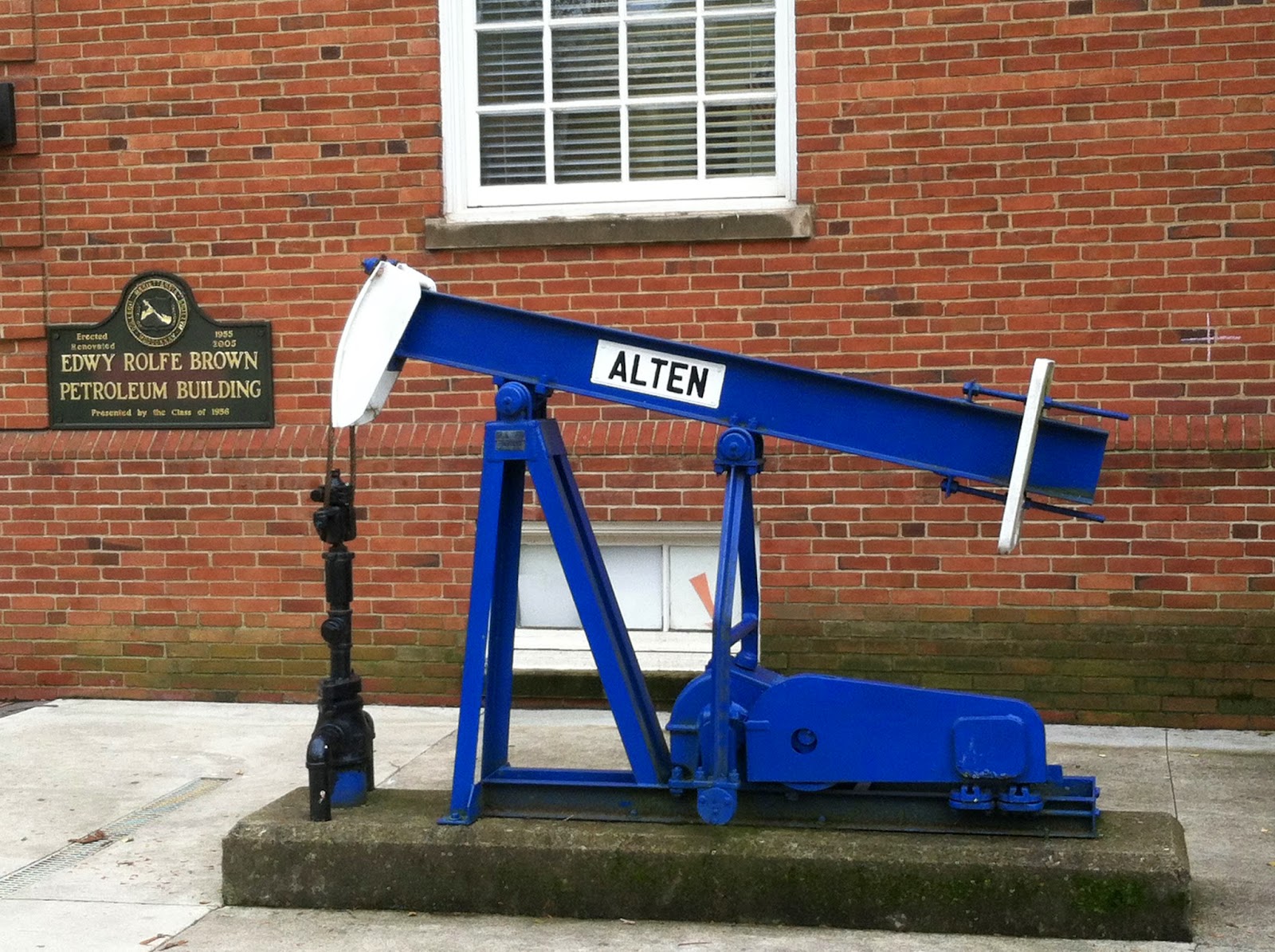 Drawing upon the 1860 discovery of oil in the area, Marietta College is one of only 24 colleges to offer this unique degree. Predominately offered at larger schools located in the oil rich areas of Texas and Oklahoma, this Midwest school offers a vast amount of petroleum in the Ohio Valley.

As the only engineering major on campus, students are still required to complete the full breadth of liberal arts courses. This program is the 10th largest in the nation and the only one at a liberal arts college. As the demand for petroleum engineers continues to rise, this field offers high entry level salaries and nearly 100% job placement for graduates (previous blog post). 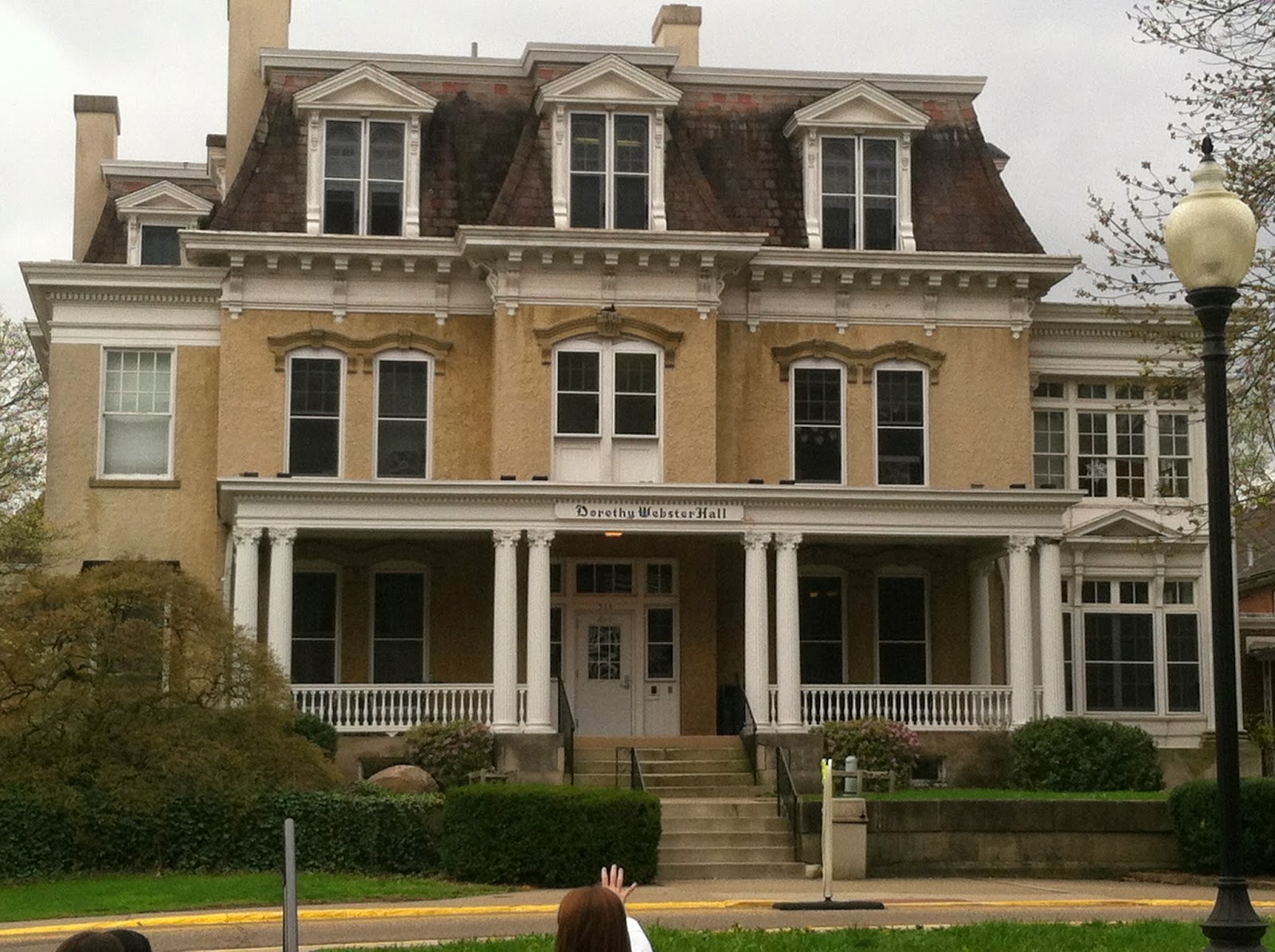 While visiting this charming campus, I was not able to fully grasp student life as it was "All Scholars Day." On this day, classes are canceled in order to celebrate the knowledge seniors have acquired over their years on campus. Each senior presents their capstone project to a panel of professors, culminating their knowledge, depth and breadth of their educational experience at Marietta. This is not just a day for seniors, as nearly all undergraduate students attend multiple presentations to support and acquire ideas for their future endeavors.

One of 18 varsity sports on campus, this nationally known Division III program has had an impact on Major League Baseball. The Pioneers have won six national DIII championships, including back-to-back in 2011-12, the first in over 30 years. The baseball team has had nine players drafted into MLB throughout its history, including relief specialist Kent Tukelve and former manager, Jim Tracy. Perhaps their most famous contribution to MLB is former student, Ban Johnson, founder of the American League and World Series.

If you would like to learn more about Marietta College, or others colleges, please contact us or leave a comment.
Posted by In and Around the Quad at 5:47 AM No comments: